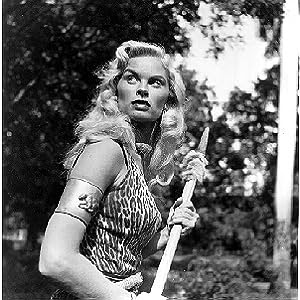 When I was a child in the 1950s (and probably into the early 1960s), there were a lot of “action/adventure” TV shows for children that had only men, no women.  So I guess they were mostly meant for boys. There were a few shows that stood out for featuring strong women (notably, and beloved by my sisters, “Sheena, Queen of the Jungle”, meant to be comparable to Tarzan and certainly a forebear of “Xena, Warrior Princess”. Many of these shows had strong, single men (bachelors or widowers, usually) with a single son, or perhaps ward. “Ward” was an odd term; it had no meaning in our regular lives, but we were familiar with it from DC Comics, as it described similar relationships there (Batman and Robin, of course; also Green Arrow and Speedy and others). It is obvious that there are many implications to these shows regarding gender roles, child rearing, sexual identity, and the role of women; however, I am not going to provide explicit analysis of these themes, which are probably best done by those with scholarly credentials. I am pretty much just going to share memories (with occasional help from Wikipedia for names and dates).

Among these shows were “Fury” (1955-60) with Peter Graves as Jim Newton, and his adopted son Joey, played by Bobby Diamond, “The Rifleman”  (1958-63) with Chuck Connors as Lucas McCain (the kid, Mark played by Johnny Crawford, was, in a rare twist, actually his son), with the adults actually parenting as well as providing role models. Two others that stand out in my memory are “The Adventures of Rin Tin Tin” (1954-59) and “Circus Boy” (1956-58), where the person responsible for the child was the hero, but most of the actual parenting care was done by someone else, an older, lower-status member of the organization. In “Rin Tin Tin” it was Sgt. Biff O’Hara, played by Joe Sawyer, in “Circus Boy”, Joey the clown played by Noah Beery, Jr. These men provided a caretaker role for the boys (both were adopted orphans, Cpl. Rusty, played by Lee Aaker in “RTT”, and Corky, played by future-Monkee Mickey Dolenz, in “Circus Boy”). At the time I perceived this role as “maternal” but in reality was just “parental”, while Lt. Rip Masters and ringmaster Big Tim Champion (what names!), played respectively by James Brown and Robert Lowery performed their handsome, lean-jawed, leader of men activities. The similarity of these two shows was quite obvious to me even as a child; they were carbon copies in different settings.

These men, Sawyer’s O’Hara and Beery’s Joey, were definitely men, both worldly wise and wise in terms of giving advice to the boys worthy of June Cleaver. They  also filled the role of comic-relief sidekick that was a staple of Westerns (movies as well as TV shows), including Andy Devine’s Jingles on “Wild Bill Hickok” (1951-58) opposite Guy Madison, Pat Buttram on “Gene Autry” (1950-56) , Leo Carrillo’s Pancho on “The Cisco Kid” (1950-56) opposite Duncan Reynaldo (in its own twist, notable because Cisco, the hero, carried only one gun while the sidekick, Pancho, carried two!), and Pat Brady in “Roy Rogers” (1951-57). The latter, of course, even had a woman, Roy’s wife Dale Evans who rode her horse, Buttermilk, alongside Roy and Trigger, while Pat followed in his jeep, Nellie Belle. Of course, I always got the Pats, Brady and Buttram, confused.

Obviously, the tradition of stories-for-boys-without-significant-female characters goes far back before these shows, to radio, film and novels well back into the 19th century at least, with swashbuckling heroes. Occasionally, notably in Stevenson’s “Treasure Island”, there is even a boy who is himself at the center of the story, perhaps making these a little more accessible than the similar-but-no-boy classics of Dumas and Sabatini. There may be nothing significant in the trope I noted so long ago of the sidekick-cum-mother, although it appears in the comics, where Alfred the butler plays this role for Batman and Robin.

And, somewhat later, in “Bonanza” (1959-73), an “adult” TV Western of the 1960s (a group that also included “Maverick”, “Gunsmoke” (with Peter Graves’ brother James Arness), “Have Gun, Will Travel”, “Cimarron”, “Rawhide”, and “Sugarfoot”), Lorne Greene’s Ben Cartwright has three sons (Pernell Roberts’ Adam, Dan Blocker’s Hoss, and Michael Landon’s Little Joe), from three different mothers, all conveniently passed on to both not be present in the show and meet the requisite morality of sequential legal monogamy (each passing before Ben married the next and sired another son). Later the short-lived “Yellow Rose” also had three sons by different mothers (David Soul’s Roy, Edward Albert’s Quisto, and Sam Elliott’s Chance McKenzie), but the patriarch was only married to the mother of Roy. And of course, to Cybill Shepherd’s character, who also had affairs with all of them. There was also a kid, Roy’s son, and humorously Shepherd’s step-grandson. It was, I have to admit despite having had a crush on Shepherd since she was on the cover of “Seventeen”, a pretty bad show that lasted only one season, 1983-84. 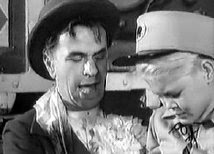 OK, enough memories. I could post lots of pictures, but I think I’ll just stick with one. The anomaly, Sheena, Queen of the Jungle. It had its origins in films and pulp novels, and was resurrected more recently, but the one that sticks in mind, and I am sure that of my sisters, is Irish McCalla in the TV show. Oh, and maybe Noah Beery and Mickey Dolenz from Circus Boy.
at May 15, 2013 No comments: