Less Fauna at the Lake Fort Scott: Is it the hunting?

I live in Kansas City, but have a cabin 90 minutes south on Lake Fort Scott. It is pretty and peaceful most of the time. It is not always quiet, as there are frequently power boats going by pulling water skiiers or folks (mostly kids) hanging on to a water-couch (??) or speeding to a corner where they can fish quietly with the electric trolling motor, or in the case of jet-skis, simply running around in circles creating noise and wake. And there is some building, and folks mowing the grass. It is nicest during the week (if you can get away) or before Memorial Day or after Labor Day, when there are fewer people and boats.

So I like taking my kayak out early, before the power boats get busy, and paddling the shore, looking for wildlife. I’m not a birder or wildlife biologist so I don’t know everything I see, but do know I see deer, and otters, and minks, and lots of birds and ducks. Great blue herons, and sometimes green herons and wild turkey and “our” osprey (which is not supposed to live in Kansas). 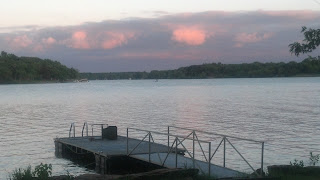 But not so much this year; instead of at least 5 or 6 great blues on a paddle down the length of the lake, I’m happy to see one, and its way down at the end. For the first time this year, they allowed hunting along the shores of the lake (“only” shotgun and bow, a relief, not deer rifles whose bullets can travel a half-mile). There wasn’t a whole lot, I think, because there are plenty of other places to hunt around here, and it is pretty clear that the decision was made for primarily political (“we believe in hunting!”) reasons. So, maybe it was the hunting this winter and spring that scared them off; even though it is summer now and there is no hunting, I guess it could have disrupted their nesting season. Maybe not. Maybe global warming is coincidentally having its impact this year. Or something else. I don’t know.

Still, it’s sad. There is a lot to be said for the lake, and beauty, and quiet, are a big part of it. And, with the shotguns booming, the “off season” will not be so “off”. And I am less likely to see a big flock of white pelicans resting in the middle of the lake during their fall migration. And see fewer birds and animals in the summer.