Yonkel is good at rustling. He can also make noise, or jump up on the bed, or, already on the bed, sit up suddenly. He can jump off the bed, wander around, loudly lap water, and in particular scratch himself assiduously, seriously jingling his dog tags. At the lake house, there are also the beaded curtains to the bedroom that he can make noise going back and forth through, although Fry, not a rustler, does this as well. Sometimes he does not do any of these distinctive actions, but just paces around, breathing, not randomly but right there by your bed. It is purposeful. He wants you to get up. 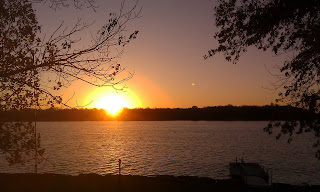 Why is not certain, but my hope at 6 in the morning (first I thought it was 5) was that he just to be let out; at the lake this is a relatively easy matter. I recognized it was six because the sun was coming up, beautiful red sky on the eastern shore, and so looked at the clock. I considered washing my face, brushing my teeth, putting on a suit and going out in the kayak to enjoy the first light. I decided to try to go back to sleep.
Not terribly successful. It couldn’t have been 15 minutes, no real sleep, when the door was scratched and Yonkel needed to come back in. OK, I washed my face, brushed my teeth, and put on a suit ready to go out. But not in the kayak; how could I leave the dogs? Fry was still outside, and Yonkel would want to come. OK, I could take the rowboat, and attach the electric trolling motor that is in the shed, using the marine batteries that faithfully stay charging in the bedroom closet for just such an event. I knew getting ready would take a while, but I could bring my dogs. 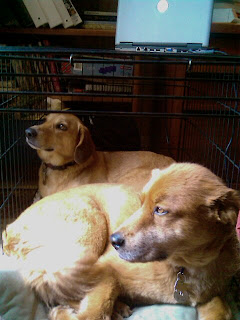 Well, of course, the rowboat had been moved over to the other side of the put-in, as it had been lying on the concrete and rocks right below the tree that had burned down last week and was now a stump. (That’s another story.) The boat was lying on top of the sailboat hull, and first I had to turn it over. Not a light boat, all steel, but heck, that’s probably why it didn’t burn. And haul it down the concrete put-in to the water. Let’s just say was not easy; it is easier to pull from the front, but this was not an option.
I had carried the battery down to the water already, so just had to go back to the house for the crawling-insect spray, get the motor and oars and life vest from the shed, attach the motor and the battery, get the dogs in the boat, and go off into the fast-lightening but still definitely misty morning. I got the spray and sprayed the boat. In the shed, the oars were near the door (Jimmy and the kids must have used them). I note, with some satisfaction that my work had been worth it, that the kayak is kind of buried and would involve some work to pull out. I put on my life vest (too tight; found it had been adjusted for a kid and fixed it), found the motor in the corner, lifted it, put it down on my sandaled foot (not too hard). Grabbed the oars in one hand, and the motor in the other and stepped down from the shed onto the little two-step to the ground.
Only got to the first before I found myself on my back, in some pain having banged it on the lower step and my head on the doorway as I had gone down fast, slipping on the wet, slanted wood step. Darn! I did this last year! I should remember to be careful  when stepping out of the shed. Onto a wet step. And especially when the bottoms of my Tevas are covered with mud from walking around moving the boat on the wet dirt. (This latter I noticed later.)
Luckily, I am not too hurt. Could have been but am not. Maybe the life vest cushioned my fall (right). Get up, get the oars and motor and take them down to the rowboat. Its stern has moved a little further out, and it is rocking more (someone had gone by, even this early, with a power boat. You may be planning to fish using your electric trolling motor, but you need that 95hp gas motor to get you the half mile from the dock to the fishing spot fast!). I put the oars in the locks, grab the motor, and carefully (I am capable of learning) make my way to the stern and fasten the electric motor. I carefully make my way back, and retrieve the battery, and bring it back to the stern so I can attach it to the motor.
I could have attached it, but chose not to. This is because it would have been useless, as I now note 1 inch segment of the power cord which is not there (only the red half). Good old pack rats! Add this to the list of sail sheets, foam rubber pads, power motor pull cords, and pieces of the orange extension cord that are no longer usable.
Well, too much done to abandon ship. I have the oars. I call the dogs. No response. I call again. Finally Yonkel shows up; Fry is nowhere to be seen. I invite Yonkel into the boat. He evinces no interest. I coax him. No. I push off, to show him I am serious, then float back to pick him up. He sits there, smiling. I call him again. He gets up and comes to within two feet of the boat. No closer. The heck with it. I go off rowing by myself.
Not too far; rowing backwards means you can’t see where you are going, rowing forwards is slow. And the tholes are attached to the oars too far down, so the ends of the oars hit me in the (lifevest-protected!) chest as I come to the middle. But still pretty; I go into the mist-covered cove nearby, and see what must be a weasel of some kinds scampering around on one of the docks. First I thought it was a squirrel, but it is a little too long and lean and what would a squirrel be doing down on the dock and the rocks next to it anyway? I had forgotten the binoculars (probably would have been around my neck and damaged in the fall, anyway) and by the time I am close enough to further identify him using a book (weasel? Stoat? Ferret? Too small for an otter…) he is hidden in the rocks.
I startle the Great Blue Heron who lives in the cove and he flies off majestically. When I head back, probably out for less than a half-hour, Yonkel is happily waiting. I put away motor and battery and pull the boat up and go in to make coffee. Yonkel comes in, Fry (who has reappeared) stays outside. Next time, back to the kayak.
Note: I have it on good authority that it was a mink!
.
at August 14, 2011