It is colder than you might have thought, or at least might have wanted. When my son arrived almost at midnight on the 22nd, it was less than 35 degrees; maybe not much colder than what he left in Chicago, but he was hoping for tropical paradise. A couple of days ago we had highs and lows of about 61 and 33 and NYC was 67 and 41. Nonetheless, he hasn’t seen precipitation and there are flurries in Chicago. It was raining a lot last week; it was raining on Sunday and Monday. On Thursday, we went on a hike and it was lovely; no worries about rattlesnakes in the Tucson Mountains when it is this cold.
Our trip was less uneventful; left Friday evening, stayed in Pratt, KS, and headed west and south on US-54. It’s prettier than going on the Interstates, 40 and 25. Somewhere in the construction zone, however, a few miles south of Carrizozo, the driver’s side tire exploded. We must have run over something sharp a while before and it imbedded in it. No shoulder, so Pat steers it carefully down a small embankment onto flat dirt. Shredded. We call AAA and are told 45 minutes, so try to change it, with little luck. It’s been raining here also, and the dirt is soft, and instead of car going up, jack goes down. Raised it some with the help of a piece of flat concrete, enough to get the wheel off, but not the donut spare on. Within about 2 hours, as the sun is beginning to set, the AAA guy arrives with a lever jack, from 50 miles away over the mountain in Ruidoso. We are able to get the tire on, although it is harder since VW (it is a pretty new Jetta Sportwagen Turbodiesel, 40 mpg on the highway + room for the dogs) makes the bolts separate so you have to line up the tire with the holes, instead of just placing it on bolts that stick out. So on our way the hour to Alamogordo, where the Walmart tire place is still open for another 20 minutes and they have exactly one size 225/45/R17 high performance tire. Which is all we need. So we figure out how to reset the tire pressure light, treat ourselves to a nice hotel another hour south in Las Cruces, and head onto Tucson in the morning. And we think about how lucky we are to have money and credit cards in our pockets and what a real disaster such a blowout was when we were young and had nothing.
So we have a relaxing few days, going to the gym in the morning with my father who is spending the winter here, visiting my sister and brother-in-law, and Pat’s sister and nephew. And, of course, having another blowout, right front this time, and right in Tucson. Must have been another piece of metal imbedded. Who knows? We are now swift at tire changing, knowing where all the pieces are and having firmer dirt, and we head to the Firestone place to get our 2nd tire in 3 days. We’ll pay more attention to that low pressure light…
Anyway, Pat and Herbie, my father, had a good time shopping the 99-cent store in the mall where the Firestone place was, so all was not lost, and  so far the rest of the tires have stayed intact. We’ve visited Nancy’s new place, a double-wide she calls “My Little Palace”, in a 55-and-older mobile home park in the foothills of the Tucson Mountains. She is located high, and has put picture windows in the NE facing side looking out over the Catalinas and the whole valley. In addition to the path to the rec center and big swimming pool, there are trails into the desert out her back door. And all for a price, including renovations and restoration, for a fraction of a house in a much less nice area. And, despite the rain and chill, not much worry about tornadoes or hurricanes here!
The dogs like running around the fenced in yard around the little house my father is staying in, owned by and next door to Becky and Bill, though this didn’t stop them from trying to dig their way out in soft dirt, creating a hole that he had to fill with rocks. We see this when we go to pick him up, to try to fix his computer and go to the gym. And the trees, everywhere, but especially in Becky and Bills front yard, which they have walled and landscaped, and have placed several types of feeders, are filled with birds. Hummers, red house finches (such a dull name for such a colorful bird!) and so many others.
We’ve also hiked the Tucson Mountains, and had a gathering at my sister’s for all our old friends, and had dinner with Barry and Joyce, and gone to see the new Robert Downey Sherlock Holmes action flick, and had bunches of meals together, including lunch yesterday with one of my medical students and her parents who live here, lovely people. And picked up a great deal on steaks and fish from a guy with a 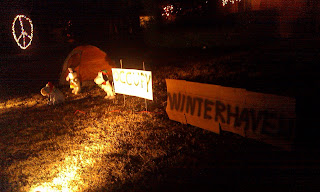 truck – the bacon-wrapped filets mignon and ahi steaks last night were great. And Adam is here, which is wonderful, and last night we walked the streets of Winterhaven, two blocks away, to see the fantastic Christmas displays they put up. We liked "Occupy Winterhaven", ooh-aahed at the amazing imitation-Bellagio light show, and the dogs ate popcorn off the street. A good time was had by all. If cold. 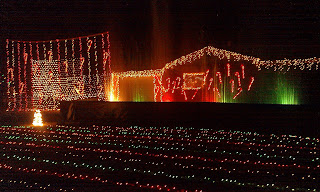 But Tucson is Tucson, and the mountains are still there, and I am looking out the back doors at the Catalinas and Finger Rock. And, though it has been light for a while, the sun is coming from the east and illuminating it in a direct light almost as beautiful as the reflected red light from the west last evening. The cactuses have survived another night, and today is Christmas Eve. Pat and Nancy will take Sean up to Phoenix to fly to see his father in New Jersey, and then we’ll go see the new American “Girl with the Dragon Tatoo”, and have dinner, if not the traditional Chinese food. Family is good, and so is life.
at December 24, 2011