Cooler summer days at the lake

Summer has cooled off in Kansas; after the hottest July ever, with very few days under 100, we had a lovely weekend last week at the lake. On Saturday, the high was in the 80s, with little breeze. Saturday morning I went kayaking. I wasn’t sure if I would go all the way down to the streams that feed the lake, especially after passing through the gnat-covered surface on the biggest, widest part. But I did, and saw a lot of wildlife, including an otter. I was just turning into the feeder, when I saw something swimming to my left; at first I thought it was a turtle, but it swam for too long without going under. Then it turned left in front of the kayak and I almost ran over it until “slap” went its tail, and it went under.

Along with the heat has come drought, and the lake is several feet down, even lower this weekend than last. This has some good features for seeing wildlife in the morning, as the birds and animals can come further down, onto more exposed mudflats. On my kayaking this morning, for example, I saw a great blue heron in the middle of the lower (shallower) part of the lake, standing on a branch sticking up out of the water.

No gnats covering the surface this morning (by the way, they were gone on my return last week), but, in addition to a couple of barking dogs, someone a ways down thought mowing his lawn at 6:30am was a good idea; I was only a little bothered, but I’m glad I am not one of his neighbors trying to sleep in on a Saturday. So I pressed on, and as I passed the first cove to the right beyond him, I saw movement on the shore, maybe a deer. I slowly and quietly paddled in, and saw it, and the other one I had dismissed as a stick from farther away. And the great blue heron on a rock on my left, which flew off as I turned. (not my pictures! I’m not taking a camera out in the kayak!)
So I stayed close to the west shore where there are stretches with no houses because the road runs right by the lake; however, at that time of morning no cars to disturb things. Near the shore I saw the swimming I now knew as an otter, and paddled toward it. Rather than diving under water, it climbed up on a rock near the shore, giving me a great view of it! Then, down a bit, I saw another great blue a little ways off, and then a smaller bird on the rocks very near me – a green heron. It, unlike, the great blues, was not fazed by my presence. 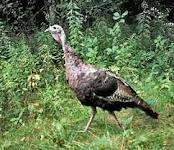 And I continued south, still not sure how far I’d go, but continuing to see great blues (like the one on the log in the middle of the lake) and then, as I approached the end where the stream comes in I saw what first looked like two herons on the shore, then more, then more. I quietly approached, and more and more came out of the woods, until, as I got quite close, a flock of more than a dozen wild turkeys were on the mud flat.

That’s a lot to see in one kayak trip so I turned back toward home. But there, on the shore, near me, fully visible, another deer. And along a ways, paddling near one of the spits of land built out of rocks piled there for fishing, I again came within feet of the green heron (or its brother).  Then, more quickly toward home, ignoring the more great blues, but, as I approached the last point I saw “our” osprey soar overhead for the first time this year.

I left the kayak and walked to the house and the coffee I had set up to brew. And swimming by came three white geese with orange “bulbs” at the base of their bills. Not sure what species; if the bulb had been black, they’d look like swans.