Les Miserables: not just a good show, but a really important theme

I saw the film Les Misérables recently. I liked it. I acknowledge that it was too long, and that the actors in it were not chosen for their singing voices. I even thought that the opera-style everything-is-sung-even-dialog was ok. I suppose I would have been less surprised by the latter, and maybe even more intolerant of the former (the singing) had I been one of the 60 million or so people who had seen the musical on stage, but I was not. I was familiar with the story, though I am certain I never read the entire 1500 pages (Cliff’s Notes, maybe? or "Classics Comics"?), and I had seen previous film versions. 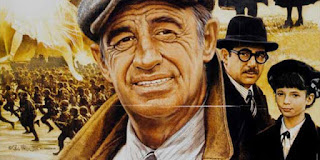 My favorite is the one with Jean-Paul Belmondo, updated to take place in WW II, from 1995. I have always like Belmondo, but tended to think of him as the lean hero of his youth; to see him as the big, handsome older man in his 60s (he was born in 1933) was great. And it seemed more plausible that he was able to lift the cart off the trapped man than Hugh Jackman, even though Belmondo was much closer to what Jean Valjean’s actual age would have been.

The reason that updating the Belmondo film to WW II was fine was the same reason I liked the recent movie: that the social and political issues it addresses are timeless. Les Misérables, book, musical or film, is not about the music but about the oppression of people – mainly poor people – by the rich and powerful and their minions. It is a profoundly political movie, and to see it and to not understand that would be, well, something I don’t understand. It is not just about the nobility and heroism of one man, who was imprisoned for 19 years for stealing a loaf of bread to feed his starving nephew and then becomes reborn and redeemed (did he have to be redeemed?) by a kindly monsignor, and his future works, which included sparing the life of his life-long adversary Javert when he had the chance to kill him.

It is not about religion. It is about the ever-present possibility of the people rising up to free themselves of the yoke of tyranny as much as the tyrants continue to be able to continue to return to power. When Anatole France wrote in “The Red Lily” in 1894 that “The law, in its majestic equality, forbids the rich as well as the poor to sleep under bridges, to beg in the streets, and to steal bread,” he is both thinking of Hugo and commenting on profound injustice of the social order. Les Misérables takes place between 1815 and 1832. The French Revolution has come, and gone, as has Napoleon, but there is still a monarchy, and an aristocracy, and brutal oppression of the poor and repression of those who rise against the powerful.

Kind of like today. When banks are too big to fail, when millions of Americans have lost their jobs and homes and the banks like JP Morgan Chase, bailed out by our taxes, records a record profit of $21 billion, and their CEO is proud of it when he should be in prison. When corporations seek to be judged solely on how much profit they make, rather than whether in doing so it makes the world a better place. In America, we support capitalism and for-profit corporations, but we should not be supporting rapacious profit making, profit making that depends on destroying so many people’s lives.

In Kansas, Governor Sam Brownback proposes to make up the enormous budget deficit caused by the tax cuts he pushed through last year by “growing the economy”. This is dubious and uncertain enough in itself, but this is also his solution to meeting the health needs of the people he will not expand Medicaid to cover: they will get jobs. Except that the kind of jobs they get don’t usually come with health insurance, and Brownback would be the last person to require them to do so. The goal should not be to grow the economy so that some people can make most of the money, it should be to grow the economy to be able to make people’s lives better.  In my “Medicine and Social Justice” blog from November 3, I quoted Greek physician Alex Benos saying ““Health and health care are not commodities that exist to drive the economy. They are among the social goals which we have an economy to achieve.”

The catchphrase of the French Revolution was “Liberté, Égalité, Fraternité -- Liberty-Equality-Fraternity. I recently purchased a roll of stamps, and the familiar flag stamp has had added to it “Freedom, Equality, Justice (each on every third stamp). The difference in the third one is instructive. Justice is good, and is important, and certainly was absent in France both before their revolution of 1789 and in the years depicted in Les Misérables. Sure, in the US we don’t say “fraternity” in this context, but there could be a similar word, like “brotherhood”. But it is not the word, it is the concept. It is the concept of social responsibility, of caring about others, about a “we are in this together” attitude that does not characterize American society. If it did, we would not tolerate people being without access to health care, or civilians carrying assault weapons, or ever increasing percentages of our national wealth being in the hands of the top <1%. 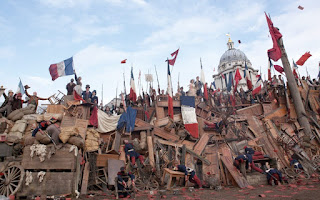 In the Hooper film, the final scene is after Valjean’s death. There has been a lot of church in the movie; in addition to the good monsignor who tells the police that he has gifted Valjean with the silver he has stolen, creating the transformation of Valjean from an amoral victim to a hero, later he and his “daughter”, Cozette, are hidden from the police in a convent. He dies in a church, with Cozette’s dead mother, Fantine, coming for him in a most mystical way. A lot of church and a lot of religion. And yet, that final scene does not show Valjean in a heaven of clouds, harps and angels with wings. The heaven he goes to is the revolution, all the people who have died in the movie and hundreds more massed on an enormous barricade, many more than were in the actual battle in the film. They are there, they are militant, and though they have been beaten are singing about liberty.

The fight will not be easy, the oppressor has many weapons on his side, you may be killed in the battle, but it is the good fight, the fight for what is right. This is the true message of Les Misérables.
at January 25, 2013