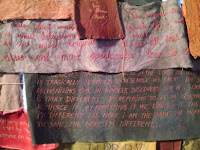 Oslo was great; not to denigrate Copenhagen, or Stockholm, but we liked it a lot. The Cathedral (a block from our hotel) is beautiful but small enough to be taken in and appreciated, kind of a shorthand for the whole city. There was an impressive exhibit of quilt patches about “the enemy” inspired by the mass murder in 2011, where a right-wing gunman in a police uniform killed 69 people (and injured 110) in a youth camp on an island. The theme of the quilts was that we lose our ability to effectively address hate when we objectify the “enemy” as other, something we could never be, something non-human; rather the enemy, or potential enemy, is in all of us as humans and we need to realize that and address hate. 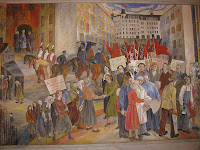 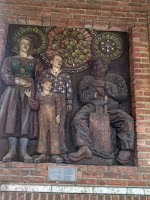 We walked a lot. The Cathedral is a few blocks from the Central Station on the pedestrian street Karl Johans Gate. At the other end is the Radhus (City Hall), where they present the Nobel Peace Prize (the very impressive Nobel Peace Center is across the square), is very beautiful. The huge room where the Prize is presented has a wall covered with murals, depicting primarily the Nazi occupation during the war, but also workers struggles for food (and being beaten). It is also decorated outside with reliefs (woodcuts, I think, but like frescos) of Norse myths (descriptive plaques conveniently in both Norwegian and English).

The Nobel Peace Center is extremely interesting, and moving. The first floor is dedicated to the 2014 co-recipients, Kailash Satyarthi and Malala Yousafzai, "for their struggle against the suppression of children and young people and for the right of all children to education". Malala, of course, was the Pakistani girl shot in the head by extremists for the “crime” of going to school as a female, who has bravely recovered and waged a speaking campaign for children, girls, education, and peace. Kailash, less known, is a life-long campaigner against child labor and the exploitation of children, in his native India and around the world. The other floor is dedicated to past recipients of the prize, all impressive. Several have been organizations; for example, the Organization for the Prohibition of Chemical Weapons in 2013 and the International Physicians for the Prevention of Nuclear War in 1985. 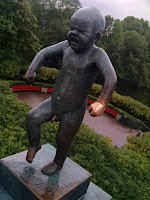 Probably the most impressive single site was the Vigelund Sculptures in Frogner Park. Vigelund spent over 20 years creating them, supported by the city of Oslo. The emblematic one is the “crying baby” (Vigelund reportedly got his model to act this way by giving him, then taking away, chocolate). But there are much more impressive sculptures, showing the stages of life, and love, and the world. The people of Oslo are said to revere it, and in fact the park is unfenced, unguarded, and “un-grafittied”; the only mark of human use we saw was that the baby’s hand is polished from all the people who hold it while their photos are taken! We took the train at 6:30 on a rainy evening and walked a half mile in the rain to get to them, thinking we were crazy but it was our last evening in Oslo. It was totally worth it. Incredible! 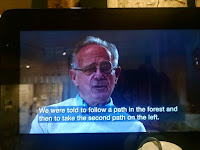 Another place we really learned a lot was the Resistance Museum, housed in the old Akerhus Fortress. While, as I have described in “Denmark and the Jews”, Denmark was at “peace” with Germany from 1940 to October 1943, Norway was invaded in 1940. When the government considered signing a peace treaty with Germany, the king, Haakon VII (younger brother of Christian X of Denmark), while recognizing the right of elected officials to do so (when he was named the first king of Norway in over 500 years in 1905 on its separation from Sweden, he agreed only to do so if the populace accepted the monarchy; it did) said he would abdicate if it did so. His moral sway was high, and Norway remained officially at war with Germany, and the king eventually made it to London where he broadcast throughout the war as the pro-Nazi Vidkun Quisling, whose name has become synonymous with “traitor” took power. Of the 2,000 Jews in Norway, mostly in Oslo, many did escape to Sweden, often by the heroism of regular Norwegians; one was 12 year-old Leif Gusd, who we met 73 years later at the Jewish Museum of Oslo where he works. Out of Oslo to a small town near Sweden, taken by two farm boys across a lake in rowboats to Sweden in the dead of night as they stayed in the dark while German lights raked most of the lake, he and his mother and sister were very fortunate.

We took a train from the beautiful modern Central Station in Oslo (Sentrum with an “s” in Norwegian) to the Central Station in Stockholm (Centrum with a “C” in Swedish), and it was night and day. OK, day and night: We left Oslo at 11:20am and arrived in Stockholm at 4:30pm in rush hour, so undoubtedly this was part of the sense of moving from peacefulness to bustle (plus the station is not so new). But we learned there was more to it; Stockholm is twice the size, and generally busy and bustling, more reminiscent of New York or Chicago or London. People are dressed up, and hurrying, and staring at their cell phones, and walking into you, and there is lots of noise (frankly, in Copenhagen and even Oslo there was lots of construction; I guess you can only do it in the summer!).

Stockholm is very beautiful; the old city on the island of Gamla Stan has enough charm and alleys and churches for anyone, as well as the Royal Palace (where we watched the changing of the guard). There are several harbors (like Copenhagen), and impressive public buildings (the National Museum, Opera, hotels, etc.) and super neighborhoods to walk around, from the grandeur of 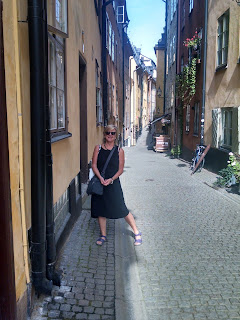 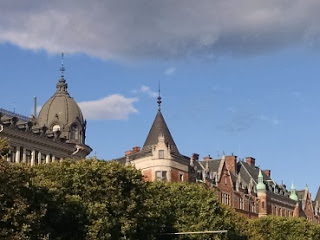 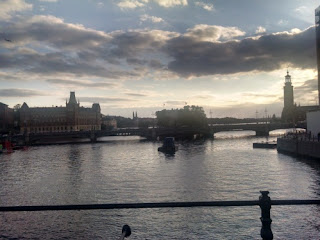 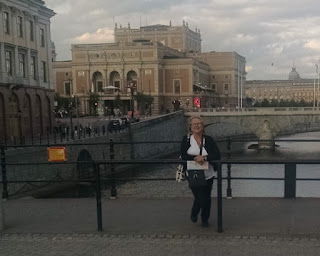 the Strandvagen to the narrow alleys of the old city. The City Hall there, Stadhus, is also bigger than Oslo’s but there are no external murals, and we didn’t get inside. It is huge, with lots of gilt. It is the site where all the other Nobel Prizes are awarded (in Nobel’s time Sweden and Norway were, as noted above, one kingdom, but why he chose the Peace Prize to be awarded by a Norwegian committee is open to speculation), and stands, as most important buildings in Stockholm, overlooking the water. As in the other countries, public art is prominent, from the tiny child in the garden of the Finnish church to a sculpture of a wolf in a shawl (red riding hood’s?) to famous people. 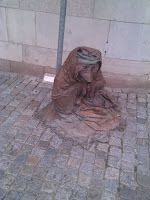 We realized later, reviewing the new sequel, that most of the sites in Stieg Larson’s “Girl with the dragon tattoo” series were in Sodermalm, a part of town we didn’t get to; had we known, maybe we would have sought them out. We went to a four-different-styles-of-guitar-playing-together concert at the “German Church” in Gamla Stan, and a great market across from another church in Ostermalm. We also took a 2-hour-each-way boat trip through the Stockholm archipelago (30,000 islands! Take that, St. Lawrence River!) to the beautiful island of Sandhamn. Different from Aero, but great to walk around in the woods.

So all of the Scandinavian countries we visited were beautiful and interesting. We spent the most time in, and saw the most, of Denmark; we saw a bit more of Sweden than of Norway because of the train ride and the trip to Sandhamn. In Norway we did not see any of the magnificent fjords or glaciers (another trip!). But we had a great time, saw a lot of fascinating and beautiful things, and learned a lot of history. We would, and will, do it again. Hopefully we can be assured of the same wonderful weather (our Swedish friend said it got cold again the day after we left!), and people.