Good views and smells in the desert


Southern Arizona, where I live, is one of the hottest and driest places in the nation. The fact that the weather is hot and dry is why a lot of people, including me, like to live here. I had enough of winter and snow (not a skier!) and especially shoveling, driving on ice, and just being unable to enjoy being outside a lot. The summers are rough, but not as much as the winters in the north (to me) and the fact that it is dry makes the heat a little more tolerable (although 110+ is still hot!).

But the dryness, while helping modify the heat in a way that you don’t get in, say, humid Florida, and good for aching joints, is much more severe when it means Not Enough Water. Not Enough Water conservation is the mantra of the desert, and requires a proactive attitude. You need to carry a lot when you hike. And if you feel the need to flush the toilet after every #1, you’re living in the wrong place. And, according to the recent climate change report issued by the federal government, it is getting worse and going to continue to. The Southwest is not just dry, with a few years of drought, it is moving into aridity, a permanent state of dryness. Thus, the impact of climate change. The wildfires devastating California and much of the West are, apparently, only going to be tempered by the eventual loss of anything that can burn.

The patterns of our rain (and we do get rain, obviously, although the average annual rainfall is less than 12”) are affected by a variety of extrinsic factors. Typically, there are two “monsoon” seasons, in the winter (mostly January and February) and in the summer (July and August), with the latter having the heavier intensity thunderstorm type rain. But El Niño and storms off the coast of Baja California, such as this October’s Hurricane Bud, also bring us rain. While October was rainy, November not so much, but a little rain in its last few days, along with colder temperatures.

This morning I walked the dog at 7, when it gets light this time of year, and it said 37 on my phone but that is the airport; another dog-walked told me it was 32 up here, but the plants didn’t freeze, so maybe the wall helps. Gotta be aware of the potential for freezing though; a sheet or towel may make the difference in whether a particular plant survives or not. Styrofoam cups can protect cactus! 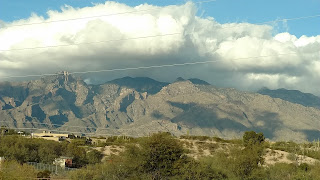 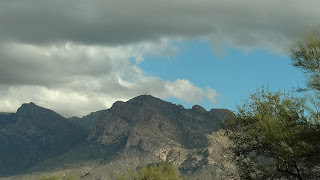 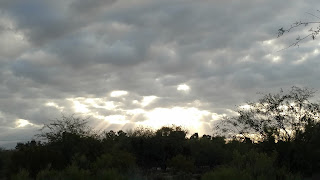 But, even as wildfires ravage California and the prognosis for the desert is grim, there are the good morning walks, with clouds covering the mountains in both the morning and afternoon, and sometimes rays of sunlight peeking through, and the pungent damp morning smells of the desert (like the greasewood especially) that even my nose (not to mention Maggie’s!) can appreciate.