.
I heard a report on the radio about a company that would put all of your CDs on to MP3s, saving you the trouble of lugging all those heavy CDs around when you moved. I guess it is the latest technological “transfer”. When my oldest son was born, we invested in a very state-of-the-art Super 8 mm movie camera. Took lovely 3 minute film strips. Not a couple of years later, videotape cameras came into use. Friends and family took all their old filmstrips and had them reprocessed into videotapes. Now you could watch the family grow up Christmas after Christmas, all on one videotape. I hope that, if you did this, it was on VHS and not Beta! Now all of those old VHS tapes are being copied onto DVDs.

So, this change of media is nothing new; it just happens more rapidly. I started thinking, with the CDs onto MP3s, whether a CD collection was as bulky as a record collection. Surely, not. Obviously the CDs themselves are much smaller than 12-inch LPs; the jewel cases may be a bit thicker than record jackets, but their smaller size must compensate for that. I assume that everyone knows what 12-inch LPs (records) are. Vinyl disks? The things that DJs scratch back and forth with special turntables? Regular turntables – oh yes, I have a very nice Bang and Olufsen Beogram with an arm that goes across the record rather than pivoting. Very pleased with it when I got it a few years before CDs came out. But, then again, I still have records that I can play on it. I don’t, but I could. I’m sure.

So, mostly for the nostalgia of people who are old, I want to point out that LPs, those 12” vinyl disks,  are called “LP” for “long playing”, because they could have as much as 30 minutes of music on each side (but rarely, more often in the low 20s). They were also known as “33s”, because they were designed to play at 33-1/3 rpm, as opposed to their predecessors, 78s, which (you guessed it!) played at 78 rpm. 78s pretty much had one song on a side; not only did they rotate more than twice as fast, the new 33s were 20% bigger (12 vs 10 inches) [note: calculation error. They're actually 44% bigger; like pizzas area of records increases by squaring the radius, so a 12" record has an area of 36π while a 10" only 25π].  and had more closely spaced grooves. They required a different needle (a diamond needle, usually) than did the 78s. Most record players, or “changers”, had a double needle so you could rotate the correct one into place, along with a switch to adjust the speed to 33, 78, or in the middle, 45 rpm. 45s were the 7 inch disks with the big hole in the middle (presumably so you wouldn’t put it on a regular spindle and wreck the record by playing it at 78rpm); they had one song on a side also, but were a lot smaller, lighter and easier to store than 78s. If you didn’t have a 45 spindle, they sold plastic adapters that you could put into the big hole and put it on a regular spindle, but you still had to change the speed. 45s were the records that everybody I knew bought and collected from elementary school up through high school; you could buy a box to carry them around in, to parties at other people’s houses. I bet there are still some in a box at my father’s house. 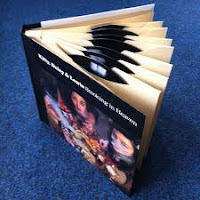 What I know are at my father’s house are a bunch of 78 rpm albums. Those of you old enough to remember records but not 78s probably never thought about why a record is called an “album”, since it is only one record in a sleeve, but 78s actually came in albums, like a picture album. Because you could get so little music on one disk, if you recorded a symphony or an opera (or even a group of songs by a single artist or group) you had to have a bunch of disks, most commonly 4. So between the two cardboard covers with the information on them were several paper sleeves, each of which had a disk in it. And, to hear the whole album (particularly if it was a symphony or an opera, say) you piled the disks on a long spindle that had an apparatus that would drop down the next disk when one was finished. And when all were done, you turned the stack over to hear the rest. Thus, confusing to me as a child who didn’t much listen to symphonies, side 1 is on the flip side of side 8, side 2 is with side 7, 3 with 6, and 4 with 5.

78 records, while vinyl, were an older fashioned kind, not somewhat flexible like 33s, but rigid and thick. And brittle after a while. At one time when I was, probably, a young teenager, my father decided to get rid of a bunch of old 78s, many of which had cracks, and discovered that they would (pretty much) break when banged on my head. Not too hard, you understand, and good preparation for smashing beer cans on my forehead a few years later! Luckily, he didn’t break them all. Some of the albums most fixed in my brain are still there in the cabinet. They would probably be scratched a reedy and thin (remember these were all monaural, not stereophonic), but they would be great. I know that Josef Marais and the “Songs of the South African Veldt” is still there, as is “Songs of Free Men” by Paul Robeson and another album of songs of the Abraham Lincoln Battalion, the Americans who fought on the (losing) side of the Spanish Republic against Franco’s fascists, along with the other members of the International Brigades in the Spanish Civil War of 1936-38. One disk had a label stuck on it that said, in Spanish “the noises on this recording are due to the electrical interruptions resulting from the bombings”.

We also still have, I am pretty sure, Robeson’s recording of “Ballad for Americans” by John LaTouche and Earl Robinson (and produced by the recently-deceased Norman Corwin), which, according to the Wikipedia entry, “In the 1940 presidential campaign it was played at both the Republican National Convention (by white baritone Ray Middleton) and that of the Communist Party”. (We also have Odetta’s rendition, on both LP and CD). And Burl Ives. And a recording of “La Boheme” featuring Victoria de los Angeles as Mimi and Jussi Björling as Rodolfo, one of my mother’s favorites. And, of course, as I was reminded the other day listening to a talk on the history of the NY Yankees, the Brooklyn Baseball Cantata, by George Kleinsinger, performed by Robert Merrill (available on YouTube as Part 1 and Part 2).

And, in case you’re wondering, while I did have a child’s 78-only record player (“Tubby the Tuba” and Tex Ritter cowboy songs), no, I don’t go back as far as wax cylinders or gramophones with conch-shell-shaped speakers. And, to be honest, if saving CDs to MP3s saves weight, think of the weight-saving benefit for 78s!
at October 22, 2011