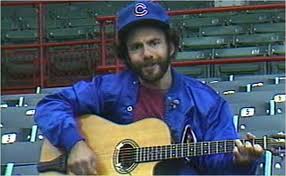 Writing about records has me thinking about music and performers. One of my favorites, possibly less well known all over the country than in his native Chicago, is the late Steve Goodman. He was a stalwart of the “folk revival” and author and singer of many important songs. When I first moved to Chicago in the early 1970s, he had a bar on Lincoln Avenue called “Somebody Else’s Troubles”, after one of his more popular songs. Its lyrics were typical of his wit as well as containing profound philosophy:
It ain’t hard to get along with somebody else’s troubles,
They don’t make you lose any sleep at night.
As long as fate is out there bustin’ somebody else’s bubbles
Everything’s going to be all right!
Among the other songs we loved were whimsical “Chicken Cordon Blues”, about a guy whose girlfriend buys only health food while he yearns for éclairs and lasagna (“This stuff is so weird, the cockroaches moved next door!”), and “Lincoln Park Pirates”, about an infamous towing company of the time that “would tow almost anything off the street”. Written like a sea shanty, it contained many local references (common to Goodman’s songs) including the assertion that
All of my drivers are friendly and courteous
Their good manners you always will get
For they all are recent graduates
Of the charm school at Joliet!
For all I know, the city of Joliet, southwest of Chicago, might well have a charm school, but Chicagoans all know that it is the state prison to which Goodman is referring! After the “fat man” (he didn’t use the well-known name of the company’s proprietor) tows all the cars off the street, he plans to
Tow all the boats from Belmont Harbor to the Lincoln Park Lagoon…
And when I’ve collected the ransom, and sunk all the ones that won’t yield
I’ll tow all the planes that are blocking the runways at Midway, O’Hare and Meigs Field!
Goodman’s most famous song was, of course “City of New Orleans”, made famous first by Arlo Guthrie and then recorded by many others, including Johnny Cash. Another Chicago-area city is featured in that one; at the beginning of the trip, “the train pulls out of Kankakee”, a city south of Chicago which nicely rhymes with “southbound odyssey”.
Another song that is a favorite of my family is “You Never Even Call Me by my Name”. The original didn’t have the “last verse” added to David Allen Coe’s famous version. According to the story Coe tells on his album, he responded to Goodman’s assertion that it was the perfect country and western song by saying it wasn’t, since it “said nothing about mama, trains, trucks, prison or getting drunk.” So Goodman added a verse:
I was drunk the day my ma got out of prison
And I went to pick her up in the rain.
But before I could get to the station in my pickup truck
She got runned over by a darned old train!
Which led Coe to say that, indeed, it was the perfect country and western song. And it became almost an anthem in some parts of Texas. Mainly bar parts.
Another great song is the beautiful, wistful “Banana Republic”, most famously recorded by Jimmy Buffet, about sad, pathetic, American expatriates
Some of them are running from lovers
Leaving no forward address,
Some of them are running tons of ganja
Some are running from the IRS
who, in their drunkenness, wish the band would
Give me some words I can dance to, or a melody that rhymes.
Interestingly, one of my other favorite songs recorded by Goodman, “The Dutchman”, another sad – or bittersweet – song about an older man with dementia and his caring wife, was not written by him but by Michael Peter Smith:
Let us go to the banks of the ocean
Where the walls rise about the Zuider Zee
Long ago I used to be a young man
And dear Margaret remembers that for me.
Meigs Field, the downtown commuter airport, was lost to the renovation of Grant Park in 2003, but Steve Goodman was lost to us almost 20 years earlier, dying from the leukemia that plagued him for much of his life in 1984, at the age of 36. He was a great Chicago Cubs fan and author of the classic Chicago chant “Go, Cubs, Go!” (“Hey, Chicago, whaddya say, Cubs are gonna win today!”).  According to his Wikipedia entry, “Four days after Goodman's death, the Chicago Cubs clinched the Eastern Division title in the National League for the first time ever, earning them their first post-season appearance since 1945, three years before Goodman's birth. Eight days later, on October 2, the Cubs played their first post-season game since the 1945 World Series. Goodman had been asked to sing "The Star-Spangled Banner" before it; Jimmy Buffett filled in, and dedicated the song to Goodman. In April 1988, some of Goodman's ashes were scattered at Wrigley Field, the home of the Chicago Cubs.” That was a pretty big time in my family also, as my son Matt, then in kindergarten, was a complete Cubs zealot (I wish I could find the picture of him dressed for Halloween as Bobby Dernier, the second baseman on that team!)
Buffett titled his autobiography “A Pirate Looks at 50”; for Goodman, the Lincoln Park pirates were bad guys, so probably remembering him as the “Lincoln Park Pirate”, though tempting, would be inappropriate. But I do remember him, and continue to love his music. Peace be with you, Steve Goodman.
at November 03, 2011