Late last month, my father turned 90. He’s in pretty good health (knock on wood, keyn eyn-hore,  כײן עַיִן הָרָע) though it looks different from his perspective than it does from that of most others. He lives on his own in the same Manhattan apartment he has for nearly 50 years (when it was new), walks several blocks every day to take his water aerobics class, and takes buses and subways to get around, both to doctors and museums and progressive events and occasionally to visit his remaining friends and acquaintances in nursing homes. He sometimes forgets things, but this seems to be not a lot more than most of us, and his analytic mind is sharp. It is harder on him when he flies places, but he still does. (The time two years ago when we both flew to DFW on Christmas Day and had to change planes to different places and a rare snow there meant the SkyTrain was out and the fact that it was Christmas meant no one was driving little carts and he had to walk from B15 to C36 – B to C is over the highway – was a challenge, but he did it fine.) 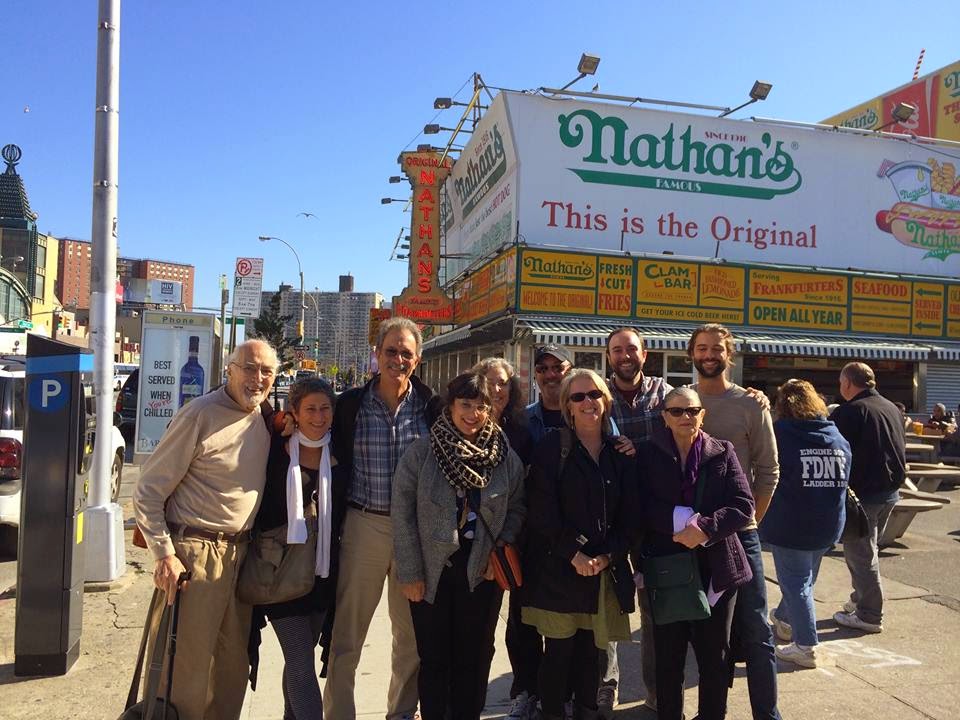 This is the part that other people see as great. For him, his left knee hurts a lot – he had his right knee replaced many years ago and it didn’t go well, so he never got the other done, and now it is really bad – so he has to count the days between SynVisc® injections. He is sometimes physically unstable. He hates that he forgets things. He sleeps a lot and takes daily naps (sounds good to me!). He never thought he’d make it anywhere near this long. His only brother was killed at 20 in the Spanish Civil War when my father was 14. His father died of cancer at 53. His mother died at 66. MY mother died, also of cancer, at 57. His oldest grandson, my son, committed suicide at 24. And here he is at 90, outliving most everyone of his generation; he just lost his last, and closest, first cousin. He knows people who are older, but most are homebound (or nursing home bound); a couple are still active, but it is rare that they see each other.

A birthday, he would be the first to point out, is just a day, one more. But it is symbolic, and the weekend before this day his children and grandchildren and spouses, none of whom live in New York, came to the city to spend time with him. In order to break up the constant eating, we rented a large van and driver and went to Brooklyn to see where he (and his children, also, in other neighborhoods) had grown up. We started in the south at Nathan’s (Famous) in Coney Island. This was a real high point. Nathan’s hot dogs and French fries are available in some airports around the country, but they taste different in Coney Island. And there are fried clam strips, hard to find anywhere in the Midwest. The clerks were apparently instructed to push Nathan’s “famous” Mac ‘n’ cheese, but none of us remember this from our childhoods as being part of Nathan’s. No, hot dogs (with brown mustard and sauerkraut), fries (the best in the world) and clam strips. And then, on a sunny but chilly day, walking around on the Boardwalk (there is, however, no more “under the Boardwalk” – sorry, Drifters – there was too much crime and drugs happening there), looking at the huge beach, and some of us (younger ones, and certainly not me) going on rides like the Thunderbolt (the roller coaster starts off going straight up vertical!) and the whatever-it-is-called that pendulums you back and forth starting way up in the air (Andy only). More on the carousel. 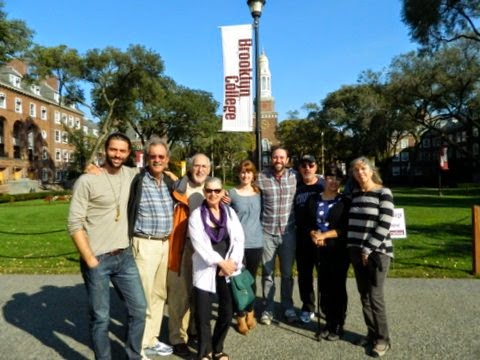 And finally we retrieved the driver and headed north, to Sheepshead Bay and to where we grew up. The kind of run-down, two family homes we rented an apartment in looking decades shabbier. But, amazingly, Zillow’s rated at about $1.8 million!! Come on! Then up past James Madison HS, my alma mater as well as my mother’s, and I was able to go into the swimming pool where the teams are now the Golden Knights, not the Highwaymen of my youth, and then to Kings Highway (after which the team name) and up to Brooklyn College, where my mother graduated and my father attended for a while. It is nice there; the quad is as I remember it, but there are more buildings to the west (I keep wanting to say south; I have a good sense of direction except when I think of Brooklyn, where I grew up I always think of what is in fact east as north and west as south, probably because the numbered “East” street where we lived ascend to the east.) Hanging around, my sister discovers a yellow parakeet. For real. Hopping around. The bird is catchable, to the entertainment of a little girl, who is worried it will die. We assure her it will not, as we place it in an empty coffee cup with a lid and an airhole, say goodbye to the girl, and the driver takes us was back south again to a Petco where Rita buys a cage and some birdseed. The bird is ravenous. 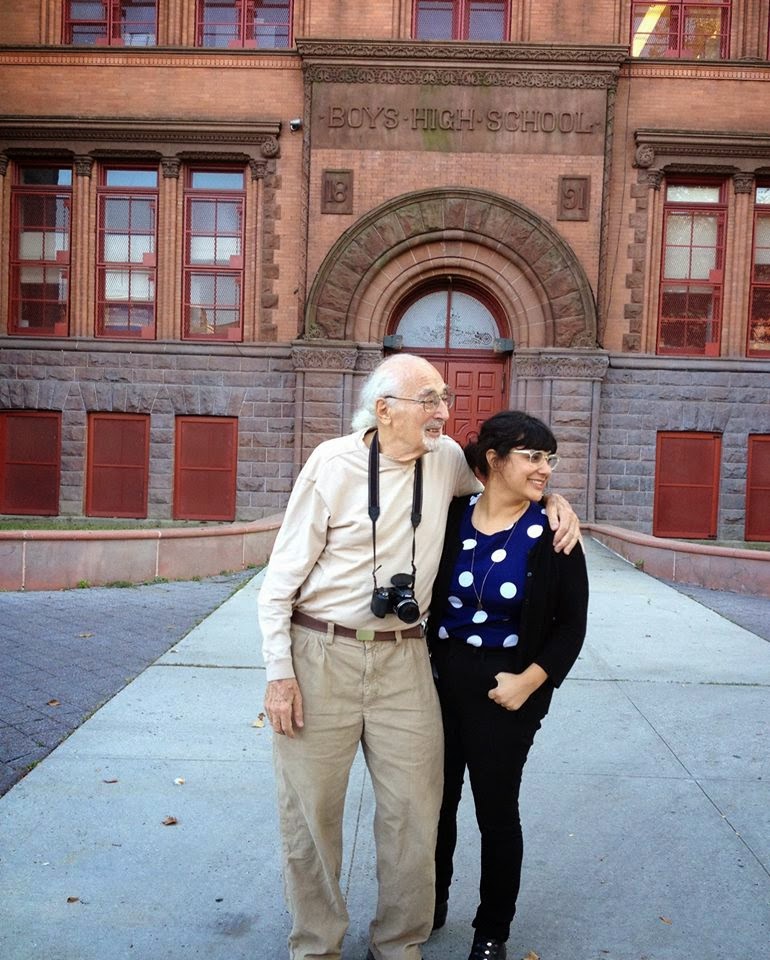 So we continue back north, through Flatbush, past Midwood and Erasmus high schools, and the old Ebbetts Field, into Crown Heights and then into Bedford-Stuyvesant where my father grew up. We drive past several addresses where he lived (they seem to have moved every six months or so; in the depression the first month was free), some of which buildings are still standing. We stop at the old Boys’ High, where he went, now not a regular high school (and not to be confused with the newer Boys’ and Girls’ high school not too far away).  It is an amazing, huge, castle-like building of gothic proportions. My father says he never saw the south side entrance in his years of going there; he lived to the north, and came in from that direction, or the east entrance. We wander around; across the street on the south side are big row houses, 4 stories plus basement. It is not the best neighborhood, even now, so we wonder what they would cost. Midblock they change to smaller, only 2 stories plus basement. One is for sale, and we look it up on a phone. Nicely renovated, 2200 sf, only $2.8 million. These prices are more than a little shocking for people from Kansas City.

We continue north, into and through Williamsburg, now hip to the north of the el-covered Broadway we are on and still Hasidic (including enclosed sukkahs built on the terraces) south of that street. Finally across the Williamsburg Bridge and back to Manhattan, tired and, on this Saturday afternoon in October so crowded we decide to even forego a stop at Yonah Schimmel for knishes, a major sacrifice, and make it back to his apartment in time for sunset. It was actually a great trip, and this is the consensus of a group of family who hardly ever all agree on what to do and whether it was fun. 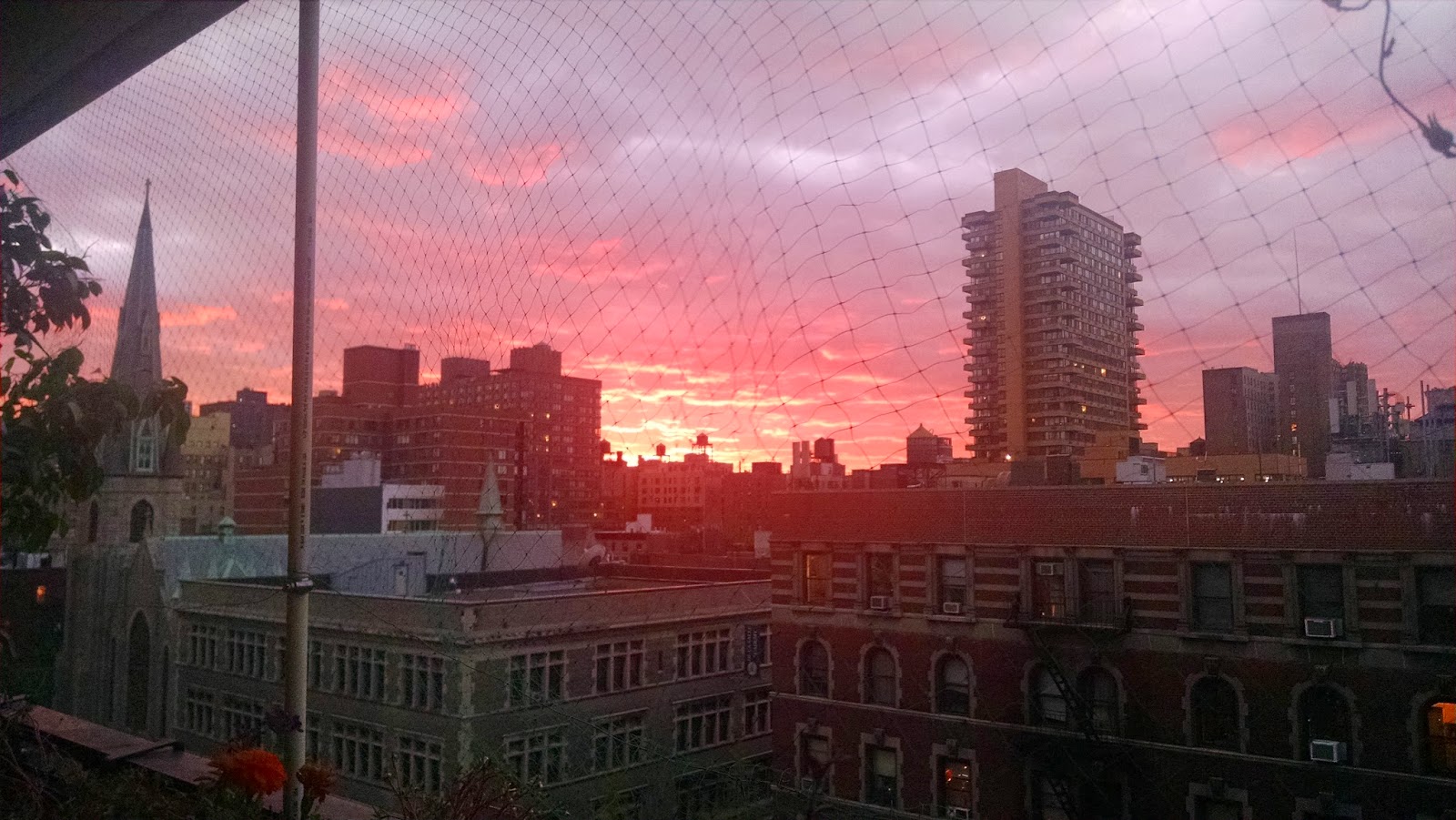 And, I think, my father liked it. No matter how well he is doing, he and we know that he is 90, and that the opportunities to do things like this may be limited in the future.