Caucusing for Bernie in Kansas

On Saturday March 5 I went to a nearby high school in Kansas City, KS, where I live, to the Democratic Caucus so I could caucus for Bernie Sanders. I had never been to a caucus before; in 2008, intending to caucus for Barack Obama, I came late and couldn’t get near the school. This year one had to register between 1 and 3, and we got there early; the lines were long and there were still people in line at 3 (they got in; we waited). I’m not quite sure why the process takes so long; part of it is needing to ensure voters are registered Democrats (or, also time-consuming, register them on-site); some may be poor organization. 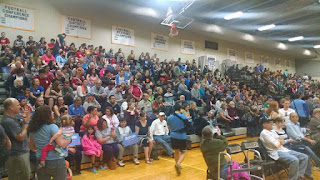 Wyandotte County, where KC, KS is, is one of the few Democratic counties in Kansas, and I was not too surprised at the large turnout, which in fact set a record for this particular caucus with over 1,0000 people, beating 2008. The fact that there were more Sanders than Clinton supporters was obvious early; as we searched for seats, we found ourselves in the Clinton section because, well, that’s where the chairs were – we, of course, moved. They tried putting us in groups of 10, lining us up in chairs, but as the crowds swelled they eventually had to move us up to the gym, with the two groups facing each other like fans of opposing basketball teams. There were a lot more Bernie supporters. 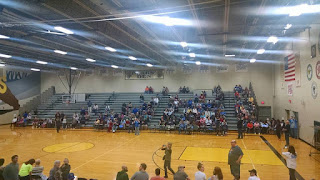 It took a long time, but finally the count was in and Bernie won 782-231. Then we could elect 12 representatives to join the other caucus reps in our KS Third Congressional District (143 in all) on April 2. Bernie won the state by 2:1 and will get 23 of Kansas’ 33 delegates. He also won Democratic caucuses in nearby Nebraska, as well as Oklahoma and Colorado. So he is popular among Democrats here in this deep red state.

But I get the sense that he is maybe not so popular among the Democratic establishment. As I said, this is a Democratic county, and several elected state representatives and a state senator were there; all but the senator, who ran the show, were caucusing for Clinton. Each side got one speaker, and the Clinton speaker indicated that she had been a Democrat for 45 years, and that now was Hillary’s “time”. There was a sense that these “new” people who were here, caucusing for Sanders, were perhaps interlopers, not true Democrats, not paid their dues.

And probably that is true. The cool thing about the caucus is that, even though it takes hours, compared to very little time to vote in a primary, you get to actually see all the people and interact with a lot of them. My group of 10 had a couple of retired people, 5 or 6 young people, some working and some students, and a couple of middle-aged people. Virtually all the young people were on the Sanders side. While there was a much higher proportion of African-Americans on Clinton’s side, there were many on Sanders’; they were a smaller percent, but maybe as many. There were also older people, retired people, working people, and a lot of people who had not been previously invested in the political process. So, maybe they had not paid their dues, maybe they had not earned their “chops” with the Democratic party. So what? They were Americans, and they were here now, and they were newly invested in caring who was the next president. That is 100% good. It could help the Democrats win. Even if the person they elect is not the one chosen by those who have been long-term Democrats.

There is a good chance that Clinton will win the nomination, and I will vote for her against whichever of the right wingers, mostly proto-fascists, wins the Republican nomination. I think lots of people will. But I fear that a lot of the folks who turned out for Bernie will not bother to vote. Is it a victory for the Democratic establishment if they get “their” candidate nominated but lose the general election? It is, as President Obama demonstrated twice in winning the presidency (and yes, Republicans trying to block him appointing someone to the Supreme Court, the American people HAVE spoken!) about bringing new people into the political process. This is the goal, both for the Democrats and for democracy.

The politicians from the legislature talked about how hard it is being a Democrat in that body, and how terribly reactionary the atmosphere in Topeka has become. They want us to elect more Democrats to the legislature. They also talked about how important it would be to not only elect a Democratic president, but to replace many of the Republicans in the House and Senate. And, yet, what are they doing in Kansas? In 2010, the blue-dog Democratic congressman from the 3rd district retired, and a 34-year old Republican legislator was elected to the seat. In 2012, when he was completing his first term, the Democrats ran NO ONE against him! This year, there is someone, a legislator told me at the caucus, actually two people, one someone no one has ever heard of and the other someone whose name he couldn’t even remember. Is this the way the Kansas Democratic Party will take back what should be a winnable seat? Why are none of these relatively well-known legislative leaders running? Gave up already?

Of course, Kansas is a red state, and will go Republican in November. Our reprehensible Electoral College system means all of its votes will go to the Republican, whatever happens in the popular vote. This means that even if there is a huge increase in the percent of Kansans voting Democratic in November compared to 2012 (and there will be, because of the immense unpopularity of Governor Brownback and his minions, whose policies have bankrupted the state), it will have no greater impact than it did in 2012.

Indeed, most of the states where there have been caucuses or primaries have been solid red; Clinton’s big victory in South Carolina will avail the Democrats nothing in November. Only a few blue states (MN, MA, VT) and swing states (VA, CO, NH, NV) have voted so far. In this sense, it is irrelevant whether Clinton or Sanders win the red states, except to the extent that who is the eventual nominee may impact how many new, young, voters turn out in the general election in OH, PA, VA, FL, NC, CO and possibly NH and NV where the election will be decided.

It is pretty clear that there will be many more if Bernie is the candidate, and none of them will be dissuaded by Republicans calling him a Jewish Socialist. On the other hand, Clinton may bring out a larger African-American turnout in these swing states. But this has to be the question now: how can we vitalize both the Democratic Party and democracy?
at March 06, 2016