Bentonville, Arkansas, Crystal Bridges Museum, and the Impact of Walmart 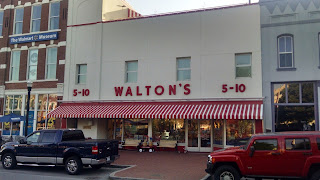 On a recent weekend, we took the 3.5 hour drive down to Bentonville, AR, in the very northwest corner of that state, with the main goal of seeing the highly-regarded Crystal Bridges Museum of American Art. That it is in Bentonville, the home of WalMart, where Sam Walton’s original “Walton’s 5 and 10” sits on the town square, now a museum itself, is not a coincidence of course. WalMart and the Walton family paid for the construction of the museum and endowed it to purchase its stellar collection. The gorgeous building, designed by architect Moshe Safdie, opened in November 2011. It is worth going to the website to see much better photos of the building than I could take, with its lagoons in the woodland setting. In addition to the art, the grounds contain the recently relocated (from NJ) and rebuilt Bachman-Wilson house designed by Frank Lloyd Wright, a prime example of Wright’s Usonian houses – smaller, cheaper, more affordable to the US everyman. 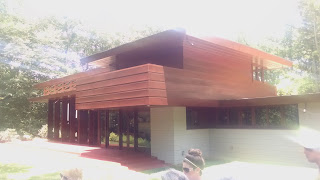 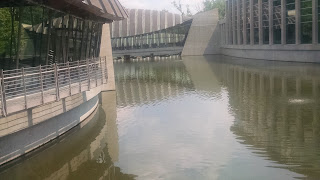 The museum’s collection may not be MOMA or that of the Art Institute of Chicago or the Los Angeles County Museum of Art, but it is pretty impressive. Beginning in the 18th century, it has iconic and chronologically organized[i] representations of pieces by most major American artists. The building i s stunning, as is the setting. The museum is free, but of course we had to stay somewhere, and chose the (definitely not cheap) 21c Hotel and Museum (lots of art there too), located one block off the town square and a less-than-half-mile walk, along a beautiful woodland path which itself is dotted with sculptures, and is part of the Crystal Bridges trail system, a hiking and biking network that goes both a little north and south for over 30 miles to Fayetteville, home of the University of Arkansas. We were only on the part between town and the museum, but walked it a number of times, both to get to the museum and also just because it is a beautiful walk. 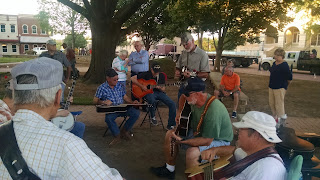 But as stellar as the museum was, the town itself (at least downtown, on a summer weekend) was absolutely cool also. When we arrived on Friday evening, the town square was busy with bluegrass groups and lots of people (and workmen laying sod). Saturday morning was a market, both farmers market and crafts fair, busy and active and very hip. The square is surrounded by restaurants, virtually all independent and (very proudly) locally-sourced, with boards identifying the origin of their foods. The Hive, the restaurant in the 21c hotel, is nationally very highly rated, with dishes that have been repeated finalists for the southern region James Beard Award. We ate two dinners, two lunches, and two breakfasts, all at different places, and didn’t come close to exhausting the options. Sunday breakfast, before we hit the road and ran into an enormous summer storm just north of town (that’s another story) was from one of the many food trucks located in the downtown; this one, Crepes Paulette we had previously avoided because of the huge lines, but were told by one of the staff as she closed up the night before that they had just started opening at 9am – it had previously been 11, so a lot of people didn’t know yet, and if we were there then we would have a shorter wait. We did and the crepes were great! The whole feel of the town (again, at least downtown and on a summer weekend) was of a very cool college town minus the heavy dose of post-adolescents.  The town is pretty ethnically diverse with a large number of Latinos from Mexico and Central America and South Asians. 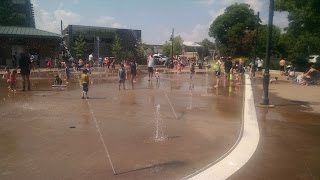 So how does Bentonville do this? Well, it is in a beautiful part of the Ozarks of NW Arkansas, with (as mentioned) the University just 32 miles south in Fayetteville, and the arty town of Eureka Springs in the mountains an hour to the East. But, of course, it is also the home of WalMart, the world’s largest retailer and a huge employer. Not only did this result in the Crystal Bridges Museum, but it, along with two other major employers, Tyson Chicken (accounting for the Latino workers) and JB Hunt trucking, has led to a real tax base, allowing this small town to provide public works. One example is the beautiful Lawrence children's sprinkler park just north of the hotel, through which (to the accompaniment of a din of joyful screams) we walked to the trailhead to Crystal Bridges; we are told it is flooded to make an ice rink in the winter. Real estate seems to have really taken off just in the last 3-4 years, possibly in part due to the museum; we saw a lovely frame house on the main street, and Zillow said it was about 2500 sf and $525,000 – and that it last sold in 2012 for $150,000! That would be a lot of home improvement, and clearly mostly due to a bump in the market, especially downtown. 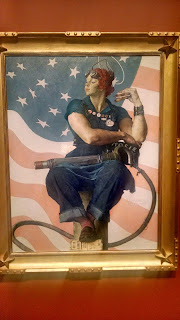 But there is, of course, a price to pay for the vibrancy and beauty of the town, for the restaurants, and farmer’s markets, and sprinkler park, and it is more than the rise in housing prices. It is a price paid by other small towns across the Midwest and South and across the country, whose downtowns are not vibrant but are ghost towns, whose town squares are surrounded by consignment stores selling second-hand goods (maybe an occasional actual “antique”) to each other and to those visitors who come through. In these towns, often the only restaurants are fast-food franchises, not locally sourced upscale eateries, and the only place to shop is – the Walmart, usually located outside of town, never downtown. We have been to many, many towns, in Kansas and Missouri and Oklahoma and Texas and other states in this situation. A few, with extra resources such as a college (e.g., Winfield, KS) have some activity downtown, or have been the focus of rebuilding after destruction (e.g., Greensburg, KS after the tornado leveled it) with walkable streets, stores and a high school that you don’t need a car to drive to. But these are the exceptions; driving to Bentonville we passed many troubled Missouri towns. Most of our small towns are not far from drying up and blowing away, and if they survive, there will be no “there” there, just the Walmart on the edge of town.

Bentonville is a very cool place, a great destination, both for the amazing museum and its other infrastructure. It would probably be a great place to live. But it is not happening in most places. There have always been more and less prosperous towns, but in the case of Bentonville compared to other regional town, the role of Walmart as the benefactor of one and cause of killing the economy of others, is particularly stark. 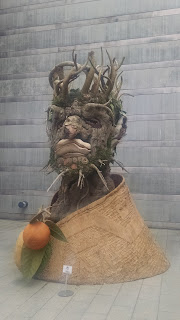 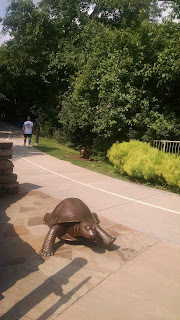 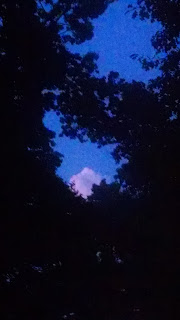 [i] Unlike some smaller-city museums where the art seems to be organized by donor, and is jarring and disjointed in trying to understand a period.
at June 19, 2016