Dog walking in the desert 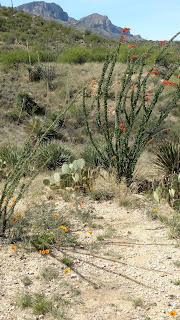 So it’s been a few months of living in Tucson, through what passes here for winter (needing a fleece and sometimes even a windbreaker for a morning dog walk) to an early Spring, with midday temperatures in the 90s in March, to a more typical Spring in late March, with mornings in the low 50s going up to about 80. Terrific weather for both walking the dogs and going hiking, and beautiful with flowering plants, encouraged by heavy rains earlier in the winter. Learning (and sometimes re-learning) the names of flowers and shrubs: Arizona daisy, and mariposa lily, and lupine, and owl clover, as well as the common cacti and agaves and brittlebush and greasewood, and flowering ocotillo. Most of the cacti are not yet in bloom, but the buds are there. Not too many hikes to take dogs on -- Catalina State Park is one, but federal lands are out. 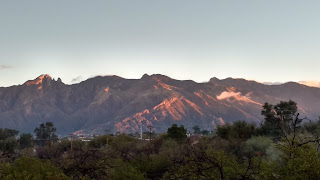 Walking the dogs has moved up a bit as you no longer have to wait until 7am for daylight; Arizona does not do daylight savings time, so it just gets light earlier. Out before 7 is quieter, in the wonderful gift of the Rio Vista Natural Resources Park that starts close by and goes up to the Rillito River (or, more often, dry wash) path that is a great asset, and joins with a whole series of other trails to make a bike loop almost around the city. Of course, also walking and running; however, the dogs and I stay to the dirt paths most of the time (although when there was water in the Rillito the dogs would splash in it).  The park borders houses (or their lots) at several edges, including a stables and several horse properties; horses also use the dirt paths. There is quite a network of paths through it, so we can vary our routes, and some of the quietest spots, where you are most likely to see a hummingbird or have a Cooper’s hawk fly by your face with a bird in its talons, are along the border fences. There is also a labyrinth to walk around to force calming, and great views of the Santa Catalina Mountains.

There is a more developed area, with parking lot and children’s playground and a big grassy area where people take their retrievers to throw balls; mine are part retrievers, but don’t retrieve at all, so we just tend to walk across or around it, to the part that is really fascinating for them, the myriad ground squirrel holes that they can dig their snouts into – and sometimes, if given the opportunity, dig away at crazily and so intently that it is almost impossible to distract them. Human hunters of buried treasure would be shamed. They see, but rarely chase, the actual ground squirrels or cottontail rabbits that abound in the park. There are coyote packs in the park, but so far we have had no direct encounters; I have seen one occasionally but the dogs have not. We do see the scat, but it doesn’t interest them all that much. We see lots of birds, quails scurrying across the ground, hummingbirds flitting in the bushes, cardinals and pyrrholoxia and even vermillion flycatchers (sometimes difficult to distinguish in bright sun), phainopepla (like black cardinals), finches of all colors. And hawks, but most are Cooper’s hawks that eat smaller birds, mostly medium sized ones like mourning doves, although this has not noticeably affected the doves' numbers; they are ubiquitous, distinguishable because their heads are too small for their bodies. 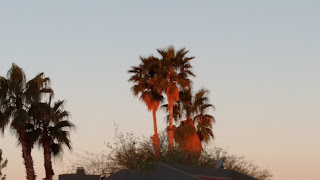 Morning is good for longer walks; we do pretty long afternoon walks also, but when the afternoon temperatures got above 90, we pushed off the later walk to 5 or later (if not cool, at least there is a bit of shade).Before 7am the paths are quieter, with fewer dog walkers, but they start to appear in larger numbers by that hour. There is a definite age pattern to who walks dogs when; in the early morning almost all older, as are the dog-free walkers, like me with sunscreen and often a hat. No one below 40, almost none below 50. On Sunday, as we drove off to hike at about 9am, we saw lots of young people (virtually all women) walking and often running with their dogs. The old folks are done by then. When the younger folks walk their dogs during the week, when I assume they are working (or going to school) I have yet to determine. Maybe they run with them later.


Anyway, I’m liking (so far) the time to do this granted by retirement. There is also more time to read the paper and be made crazy by the news, and sometimes to just have general anxiety, but if it gets too bad, I can just take the dogs for a walk…
at March 27, 2017