Santa Fe April...Fry and the coyotes

Well, I’ve been in Santa Fe pretty continuously for more than 6 weeks, and have a routine. Wake, take dogs out (Fry on leash) for shortish hike, have breakfast, work, then maybe go to Eldorado to work out. Nap, work, take a longer hike.

It is beautiful. This will be mostly a vehicle for pictures. 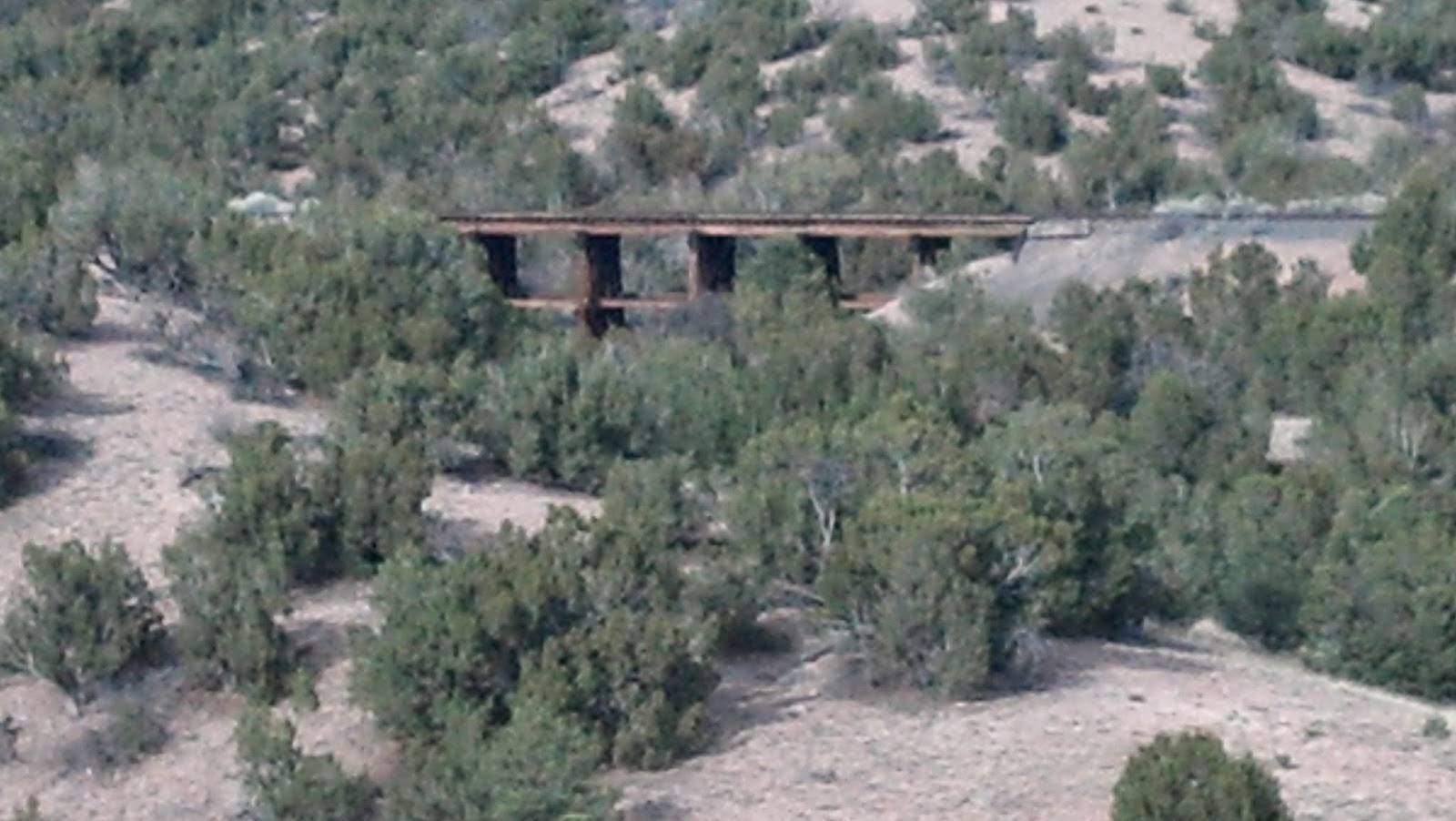 We do worry about Fry; he goes off and comes back in his own time, and there are coyotes out there. Why I don’t like him out at the dawn and dusk times when they are more active (like deer; the word is crepuscular). Last summer, he got attacked by coyotes and had some bites, so we have reason to worry; haven’t seen many in a while, but that means little. Also means little to him; he really doesn’t learn. 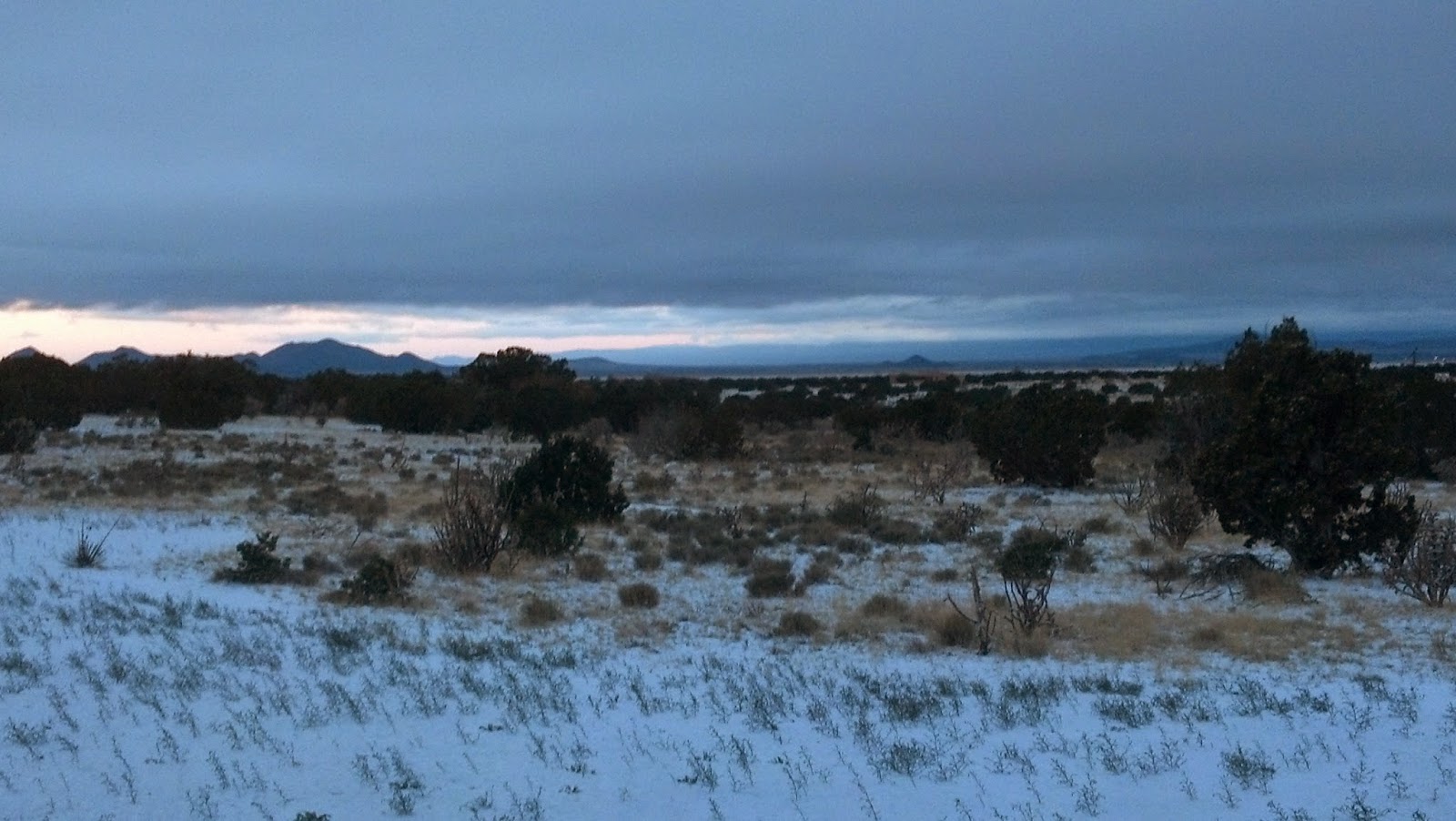 Monday, I took Pat to the airport in Albuquerque. It snowed last night, not a lot, but the morning walk was colder than it has been in weeks, about 23. Gray skies and some flurries. The snow is good; we need all the moisture we can get; several years of drought. By the time we got past Santa Fe, no snow on I-25, and down a little more bright sun. Albuquerque nearly 50 when I dropped Pat off about 10:30, 10:45, and the trees that had had white and pink flowers last time we were down there were now green.

But as we came back up the hill toward Santa Fe, the skies got grayer and the temperature dropped. By the time we hit home, it was 27 and flurrying. I opened the back of the car just a little, as I usually do, to tell them to sit before I opened it all the way and with maybe 8-10 inches open Fry was out and gone. Yonkel out too, but not gone. Didn’t see Fry back for about 2 hours.
Typical. 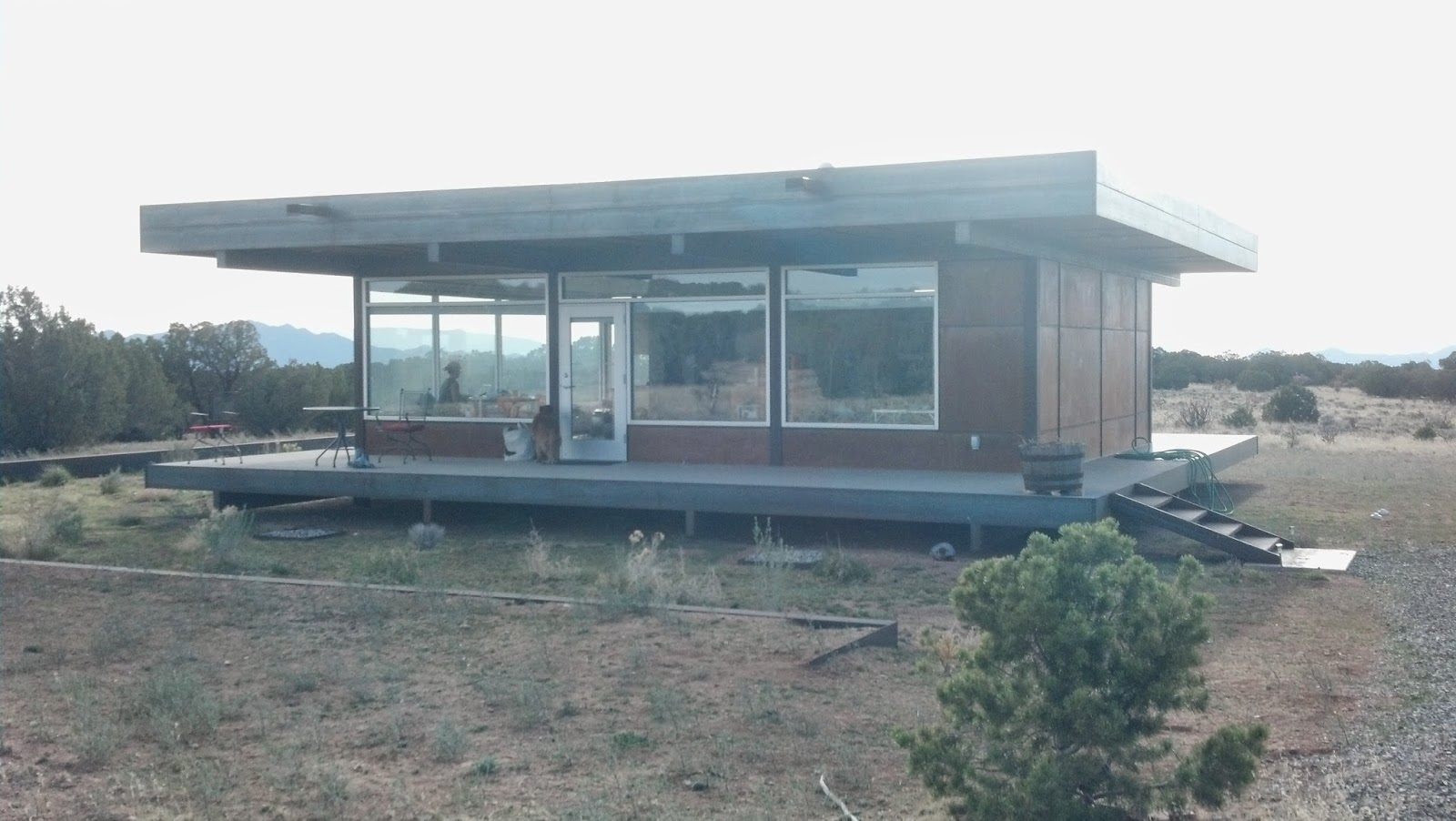 So I worked for a while, and about 4:30 got ready to go for a walk. Sweatshirt, windbreaker, tie on boots (may be muddy out there), sunscreen, sunglasses, hat – getting ready to walk out. But they are barking like there was a rabbit out there. Because there is a rabbit out there. I decide to wait for a couple of minutes, presuming the rabbit will be wise enough to run off. He is not. I am getting antsy. I open the door, and the two of them are off, giving chase, even Yonkel looking young. They do not, I think, catch the rabbit but they are gone. I had assumed that 1) Yonkel would come with me after a few minutes, and 2) Fry would go off on his own as usual, so what’s the difference?
Neither one came to join me. I kept calling. Hike was very lovely, around and back through the valley. Took about an hour. Yonkel sitting on the deck when
I got home. No Fry. 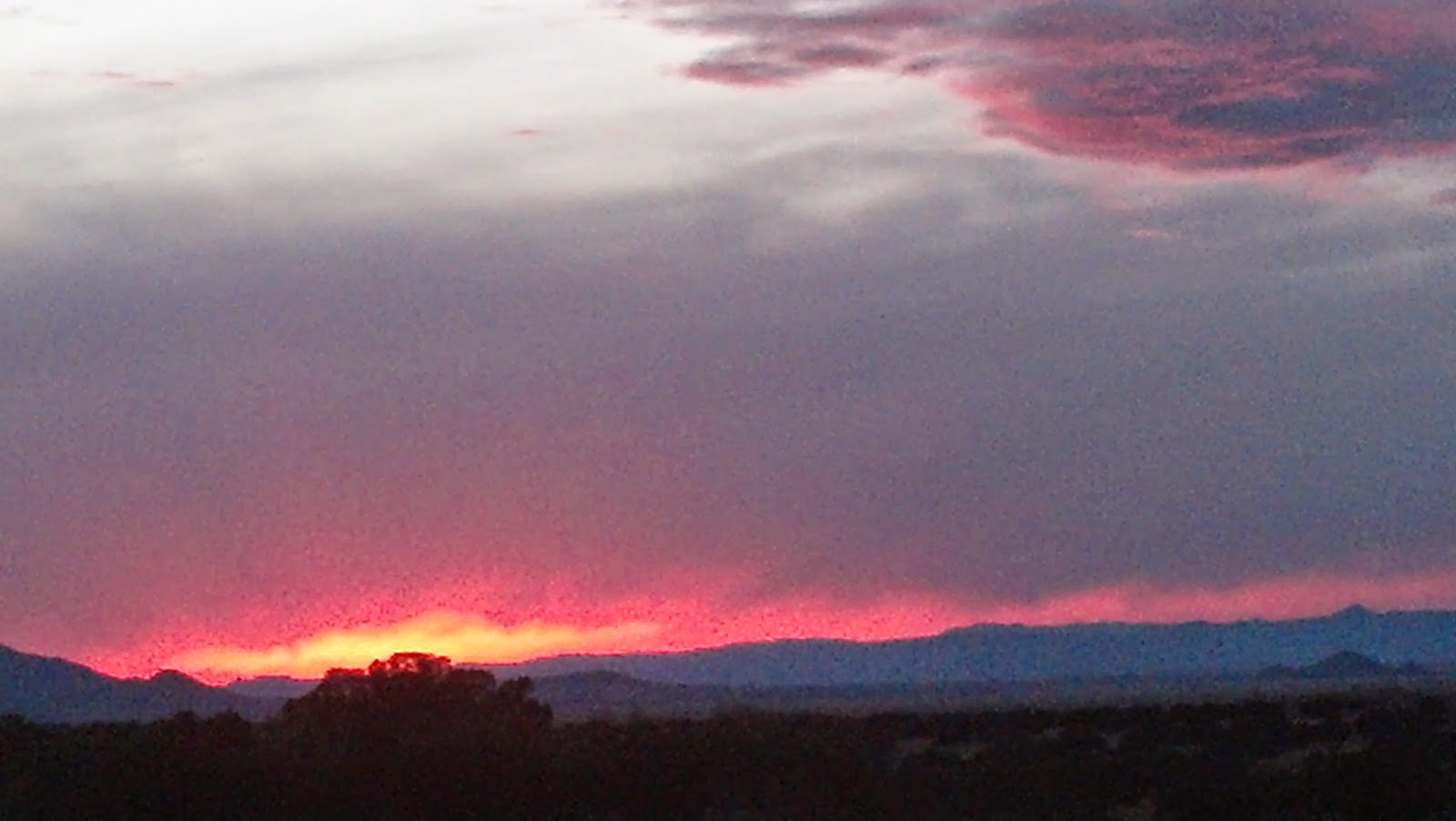 About a half-hour later, up Fry runs being chased by two big coyotes. I open the door to 1) let him in, and 2) chase the coyotes off, and, instead, Yonkel bolts out and the two of them chase the coyotes off. After a minute or so they come back, with me frantically yelling. Yonkel comes in, Fry stays out, avoiding me. Looking out for the coyotes to chase! Licking at his sides. Must have been bitten again, but he won’t let me get near him.

I leave the door open and about 20 minutes later, needing a drink, Fry comes in. I examine him. Pretty big gouge out of his left hip, smaller cut down by right groin. I sponge them out with peroxide. (You think it’s easy, one person, holding a dog and putting peroxide on his wounds?) 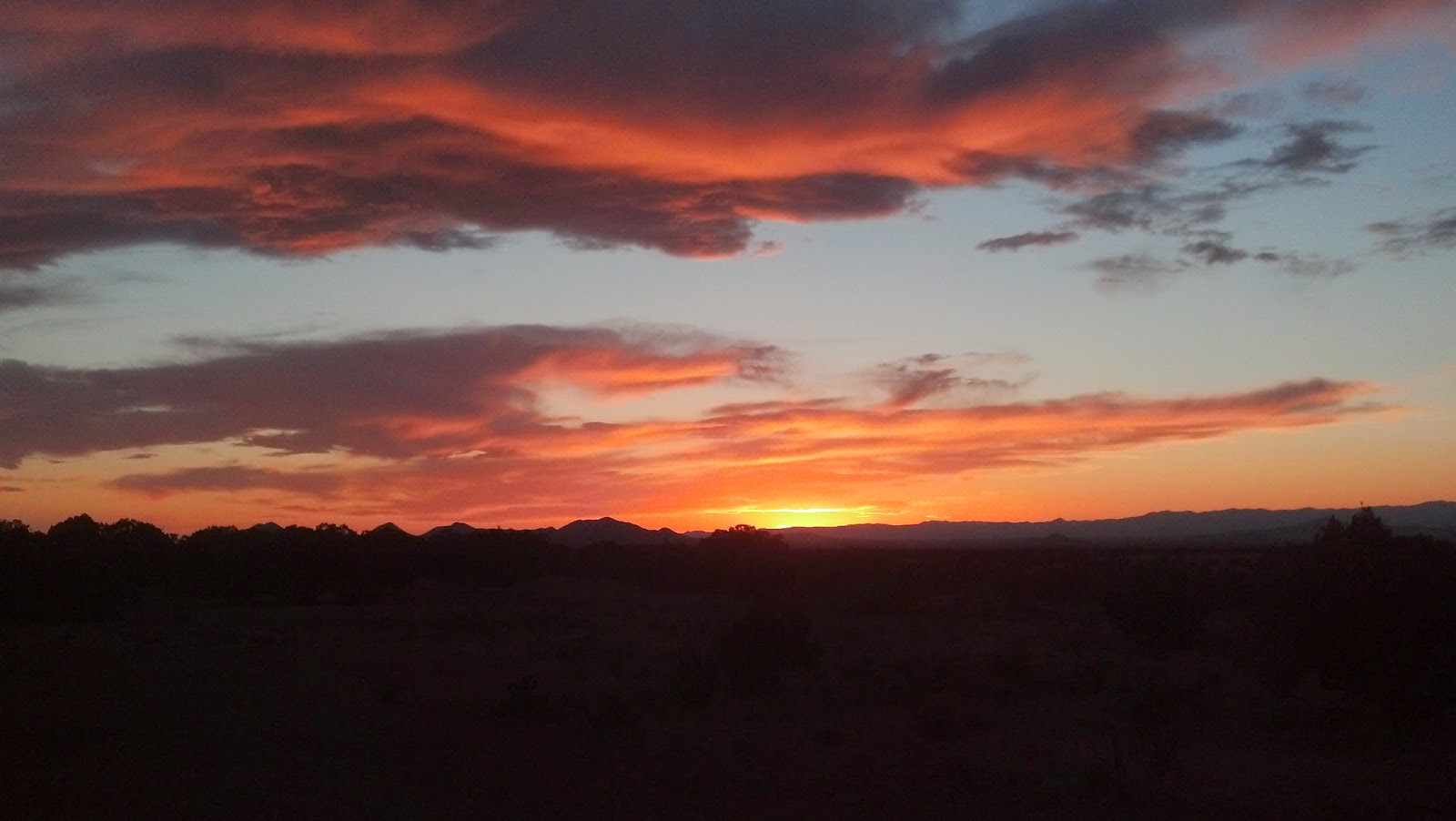 I hope they don’t get infected. Obviously, having been chased and bitten, he’s learned his lesson – not! DIdn’t they immediately – and with Fry wounded -- both immediately give chase after them? It was heroic of Yonkel to go out after the coyotes, to protect Fry. It was brave of Fry, chased home and bitten, to immediately respond and join Yonkel in chasing them off. (It is unknown whether my presence on the deck had more to do with the coyotes’ departure.) Stupid, yes. Foolhardy, also. But heroic and brave. Heroic and brave often go together with foolhardy and even stupid. In dogs, and in people.

Leash for the next few days for sure. Leash and peroxide.